I’ll start my review of the Insolvency Service’s Annual Review of IP Regulation in reverse order this year.  Let’s first look at the progress made on the InsS’ 2017 to-do list.

Here’s a comparison of items listed in their 2017 Report with their 2018 Report, which has just been published (at https://www.gov.uk/government/publications/insolvency-practitioner-regulation-process-review-2018): 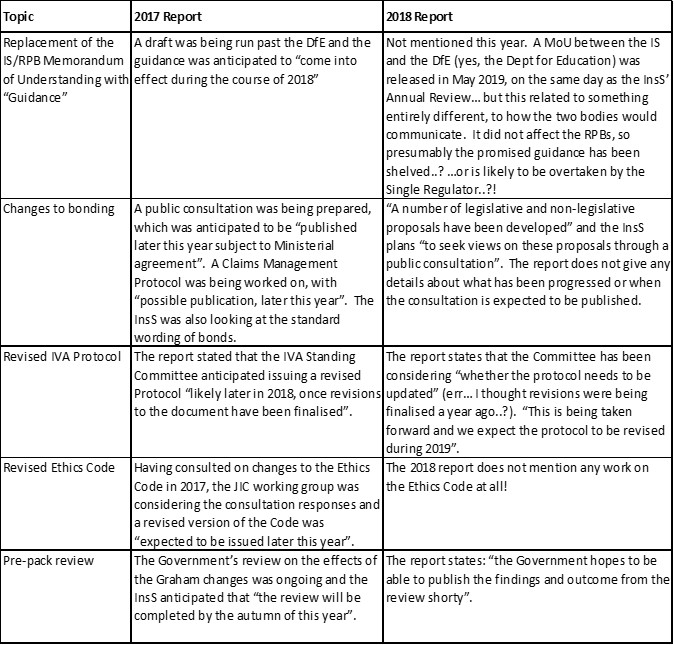 Of course, Ministers have had a few other things on their mind over the past year… but the landscape has not changed much since May 2018 when the 2017 report was published, so I would have hoped that the Insolvency Service would have anticipated realistic timescales back then.

So, if the above projects have not progressed as anticipated last year, what has the InsS achieved in 2018 and are they proposing any other outputs in the year ahead?

It all sounds a bit secret squirrel, but the report’s overview emphasises the Service’s investigatory work.  It seems that their staff have identified and been referring “potential criminal offences by insolvency practitioners”, they “have been making effective use of information gathering powers to investigate areas of concern leading to a number of referrals to appropriate bodies” and they have “used our powers to undertake our own enquiries on a number of occasions”.  They expect to “report on what we have found when we are able to, given the progress of the investigation”.

In any event, however, they are expecting “to publish shortly” a “formal call for evidence”, so at least we may have an opportunity to contribute something.

I didn’t have a chance to blog on the subject, but I’m sure the Service’s September 2018 report on RPB monitoring did not pass you by.  The report was pretty scathing about much of the monitoring of volume IVA providers and included many recommendations, largely focusing on the extents to which they felt RPBs should be investigating, and taking to task, IPs who appear to be failing: to provide appropriate advice; to pay fees and expenses from estates that are fair and reasonable; and to manage the ethical threats arising from relationships with introducers and service-providers.

The Service’s 2018 Annual Report states that they are in the process of reviewing how the recommendations from the earlier review are being implemented by the RPBs and that this would inform their Single Regulator work – no threat there, then!

So… no sign of a revised Ethics Code, but we do learn about the JIC’s work on revising SIPs.  In their in-box at the moment are:

So, the Service’s to-do list never gets any shorter, does it?  And it seems to me that the usual project-management rule applies to insolvency projects: estimate the timescale and then double it!

In my next blog, I’ll look at the complaints and monitoring stats… or I may get back to my 50 Things list…