As HMV has demonstrated, buying a business out of an administration does not guarantee its survival.  But the sale of the HMV business 5 years’ ago was not a pre-pack – the Company had traded for several months in administration before the deal was done.  Does the pre-pack deserve to be demonised?  In view of the SBEE Act’s sunset clause deadline of May 2020, what are the pre-pack’s chances of survival?

As promised way back in July, this is my third article looking at the Insolvency Service’s 2017 review of regulation.  My sincere apologies to regular readers.  I have soooo wanted to blog, I have had articles aplenty in my head, but I’ve simply not had the time to get them out.  I will try harder in 2019!

The Insolvency Service’s 2017 Review of IP Regulation can be found at:  https://tinyurl.com/ycndjuxz

Of course, we all know that compliance with the SIP16 disclosure requirements has no real relevance to whether a pre-pack is “good” or “bad”.  Personally, I’d also argue that strict compliance with the disclosure requirements does little to improve perceptions… not when compliance is measured on whether or not the IP has ticked every last little disclosure box.  However, this is what the RPBs are measuring us on, so it can only be to our advantage to try to meet the mark. 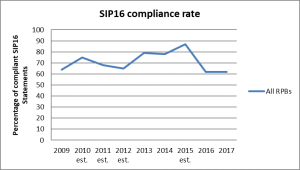 The analysis of this rate by each RPB shows an intriguing effect: 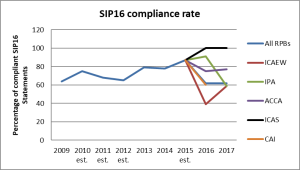 Last year, the stats for the two largest RPBs appeared poles apart: the IPA’s compliance rate was 91% but the ICAEW’s was less than half this figure, at 39%.  But now look at those two RPBs’ rates: they have converged on 59%.  How odd.

I very much doubt that the IPA’s IPs have got decidedly worse at SIP16 compliance over the year.  I wonder if it has more to do with RPB staff changes – perhaps it is more than coincidental that an ICAEW monitoring staff member moved to take up a senior role within the IPA in late 2016.

What about the change in the ICAEW’s IPs’ fortunes last year?  It is more difficult to identify a trend in the ICAEW’s figures, as they reviewed only 23% of all SIP16 statements received in 2017 – they were the only RPB to have reviewed only a sample, which they chose on a risk-assessment basis.  The ICAEW had focused on SIP16 statements submitted by IPs for the first time, or for the first time in a long time, or by IPs whose previous statements had fallen short of compliance.  On this basis, it is encouraging to see such an improved compliance rate emerging from what might seem to be the high risk cases.  It makes me wonder what the compliance rate would have been, had the ICAEW reviewed all their SIP16 statements: rather than the flatline, would we have seen an overall strong improvement in the compliance rate?

From my personal reviewing experience, I am finding that many SIP16 statements are still missing the 100% compliant ideal, but the errors and omissions are far more trivial than they were years’ ago.  I suspect that few of the 38% non-compliant statements spotted by the RPBs contained serious errors.  Having said that, earlier this year the IPA published two disciplinary consent orders for SIP16 breaches, so we should not become complacent about compliance, especially as pre-packs continue to be a political hot potato and now that the RPBs have been persuaded by the Insolvency Service to publicise IPs’ firms’ names along with their own names when disciplinary sanctions are issued.

A Resurgence of Connected Party Sales

Regrettably, the Insolvency Service’s 2017 review provided less information on pre-packs than previous reviews.  No longer are we able to examine how many pre-packs involved marketing or deferred consideration, but we can still look at the number of sales to connected parties:

Personally, now I wonder whether the presence of the Pool has any material influence on pre-pack sales at all.  I suspect that the increased percentage of connected party sales may have more to do with the economic climate: who would want to take on an insolvent business with such economic uncertainties around us?  I suspect that now it is more and more often the case that connected parties are the only bidders in town.

Insights of the Pre Pack Pool

With such a tiny referral rate – the Pool reviewed only 23 proposed sales over the whole of 2017 (there were 53 referrals in the previous 14 months, since the Pool began) – does the Pool have any real visibility on pre-packs?

The Pre Pack Pool issued its own annual review in May this year.  Here is an analysis of the opinions delivered by the Pool:

This seems to suggest that the quality of applications being received by the Pool is deteriorating.  But, as the Pool gives nothing much away about how they measure applications, I am not surprised.

The Pool’s review states that: “Although the referral rate is much lower than expected, the Pool does perform a useful function where it has been approached.  Feedback from both connected party purchasers and creditors has been positive where we have received it.”

But what exactly are the benefits of using the Pool?

The Pool suggests that creditors/suppliers could put more pressure on Newcos to make use of the Pool, but it also notes that less than 1% of all complaints to the InsS in 2016 were about pre-packs (shame the Pool’s report did not refer to the number of pre-pack complaints in 2017: zero).  Maybe there is little pressure put on purchasers to approach the Pool, because the reasonableness or not of the pre-pack doesn’t really come into it when creditors are deciding to supply to Newcos.  The Pool review suggests that major stakeholders such as lenders and HMRC could insist on a Pool referral, but why should they when the Pool has yet to prove its value?

What makes a Bad Pre-Pack?

Stuart Hopewell, director of the Pool, has been quoted as stating that he “has seen cases where the objective [of the pre-pack] was avoidance of liabilities”, which led to the tagline that “businesses are sidestepping tax bills amounting to tens of millions of pounds using an insolvency procedure that the government is considering banning” (Financial Times, 26/11/2018).

How does Hopewell spot these abuses?  The Pool itself is not at all transparent about what, in its eyes, results in a “case not made” opinion, but the same article referred to the Pool giving “a red card, based on the tax situation”.  This suggests to me that their focus may be more on how the company became insolvent, rather than whether the pre-pack sale is the best outcome for the creditors at that point in time.  It seems to me that the Pool may be deciding that the pre-pack is the final step in a director’s long-term plan to rack up liabilities and walk away from them, whereas I suspect that most IPs first see a director who – as a result of wrong decisions or for reasons outside their control – is at the end of the road, having racked up liabilities they can no longer manage.  What should happen?  If the pre-pack were refused, the likely outcome would be liquidation with strong chances that the director would, via a S216 notice, start up again, possibly with a cluster of the original workforce and assets purchased at liquidation prices.  On the other hand, if the pre-pack were completed, it would most certainly generate more sales consideration and would be less disruptive for the employees, customers and suppliers.  But wouldn’t refusing a pre-pack result instead in a business sale to someone else, an unconnected party, even if at a reduced price?  I think that this is doubtful in the vast majority of cases.

It’s not all about the Pool

The Insolvency Service’s annual review lists some questions that its pre-Sunset Clause pre-pack review will seek to answer:

While these are all valid questions, I do hope the questions won’t stop there.

Ever since Teresa Graham’s recommendations in 2015, the Pre Pack Pool has occupied the limelight.  I think that’s a real shame, as I believe that other things are responsible for the improvements to the pre-pack process that we have seen over time.  Although I complain about the micro-monitoring that the Insolvency Service has inflicted on SIP16 compliance, it cannot be denied that the regulators’ emphasis on SIP16 compliance has improved the amount of detail provided.  More importantly perhaps, the RPBs’ emphasis on documenting decisions has helped some IPs question why certain strategies are pursued – most IPs do this anyway, but I think that some need to challenge their habitual reactions and sometimes exercise a bit more professional scepticism at what they’re being told.

The mood music around the pre-pack review seems to be about increasing the Pool’s reach, potentially making a referral to the Pool mandatory (for example, see R3’s May 2018 submission: https://tinyurl.com/y7kf22ul).  However, as with all proposed reforms, the first steps are to identify the problem and to define what one wants to achieve.  I would question whether the problem is still a lack of public confidence in pre-packs – it seems to be more about a lack of confidence in dealing justly with directors who ignore their fiduciary duties in a host of different ways – and, even if it were about confidence in pre-packs, we’re a long way from determining whether the Pool is the best tool to fix this.

Finally, here is a summary of other items that were on the Insolvency Service’s to-do list at the time of publication of their 2017 annual review.  Of course, to be fair the government has kept the Insolvency Service otherwise occupied over the year.  You might be forgiven for having a sense of deja-vu – it looks frighteningly similar to 2017’s list and I assume that the tasks will now be carried over to 2019: